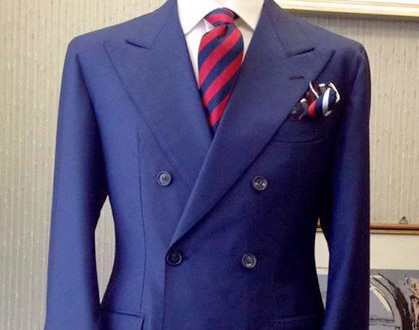 The double-breasted jacket is an authentic icon of male fashion, a garment capable of combining unending elegance and a dandy touch.

Nowadays also young men appreciate a double-breasted jacket that is the ‘flagship’ product of our tailor’s shop. In 1977 our craftsmanship in making this piece of clothing gained us a prize by the Tailors’ National Academy of Rome in the ‘Amilcare Minnucci’ National Contest.

The double-breasted jacket main feature is that the two front flaps are very wide and overlapping, with three pairs of buttons. It expresses the whole personality and fancy of the man who wears it and always conveys a sense of elegance. The origin of the double-breasted jacket, like most of male clothing, is a military uniform. It was very popular from the mid-1930s until the late 1950s, and again from the mid-1980s to the mid-1990s, but its originality made it an everlasting garment. Nowadays it is still adapted and renewed to meet the needs of modern life.

Its main sartorial features require great craftsmanship during its creation. A rough cut could transform an original and stylish garment into a paradox of itself, heavy and clumsy. The double-breasted jacket must be shaped following the body of the wearer because it is supposed to allow movements.

The jacket must follow the silhouette, without stiffening. It must be planned and made with ease. Sober and natural, with no frills. Its typical lapels must be wide and smart. The cut of the jacket must be fierce, the shoulder natural, the sleeve seam round and high.

Everything helps in making this garment comfortable and only a custom-made double-breasted jacket can enhance the man who chooses it, through a careful collaboration between the skilled tailor and the customer.